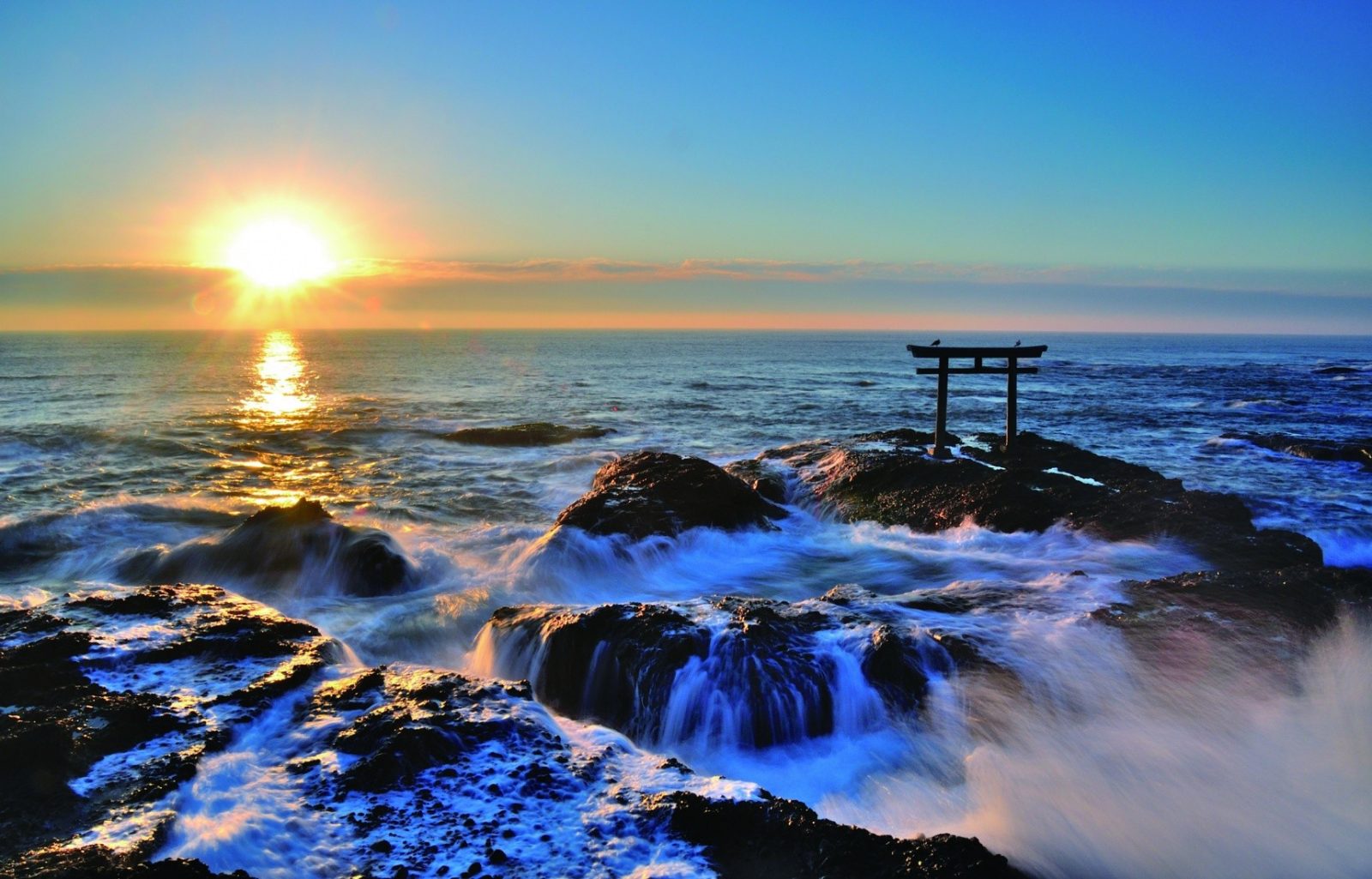 Upon rising, one looked upon the tendrils of dense clouds lingering silently within the valley, only the chorus of the broad shouldered stream below providing a voice to the panorama.  The view from the room of this ryokan was a bonding experience with nature and only enticed a yearning to revel in the outdoor onsen.  Situated mere steps from the water that had just ventured down the falls upstream and facing a portrait of autumn foliage, the communal bath oozed tranquility.  Soft voices of enjoyment danced along the rising plumes of steam emanating from the sizeable hot spring where strangers immersed themselves in its hospitality.

The breakfast hosted a gluttonous buffet of Japanese staples and was politely peppered with token Western fare to appease our bickering stomachs.  A delirious chorus of speech filled the air, but one could escape the clutter of conversation by accessing their free Wi-Fi over a life-saving cup of coffee.

Tatami mats made their debut during the Nara period (710-794) providing solace for the derrieres of nobility.  The evolution from seat cushions and bedding enjoyed by the aristocrats evolved into fully covered rooms during the Kamakura period (1185–1333) where the first shogun emerged as did the samurai (warrior caste).  Originally made using rice straw as its core with a covering of woven soft rush straw, it was a highly skilled endeavor and would have made commoners blush at its price tag.  Modernization and industrial measures have alleviated the time consuming profession, but only an adept hand can affect an outcome worthy of note.

We were treated to a firsthand demonstration of the trade by the proprietor, a gentleman kindly marked by the hand of time and oozing a humorous wisdom to his livelihood.  Custom machines made short order of the stitching process, but only a critical appreciation of fine detailing resulted in a product tantamount to its labor.  His workshop, littered with remnants of his `children` as he liked to call them, was overshadowed by the mountainous piles of the grassy base material resting outside in silence.

We had just returned from taro harvesting, perhaps a struggle for those not acclimated to farming, but an enriching trial to understand the chore of food cultivation.  The matriarch of the house, a stout bundle of vigor with a smile that could tame angry politicians, corralled us into a barnlike enclave where a hodgepodge of tables and chairs sat waiting.   Two heavily guarded jars of pickled ginger and plums (umeboshi) sat solemnly and we knew immediately once we tasted them, why the secret recipe could not fall into the wrong hands.  Just outside, a steel pot of epic stature brimming with root vegetables excavated that morning, fluffy mushrooms and infused with poignant notes of homemade miso bubbled contently.  An assortment of garnishes was lined up like dutiful soldiers in preparation of their rice ball (onigiri) assault and we were subtly drilled in its execution.   A frenzy of hands and mouths engaged in activity as steaming rice was assembled haphazardly and those with limited willpower gulped down spoonfuls of the fiery soup.  Only dulled murmurs of approval and gasps of singed tongues filled the crisp air.

Although bereft of white tablecloths, a confusing wine list and prickly waiters, you would be hard pressed to secure a reservation that could soothe your stomach`s wanton demands and embellish your day with an outdoor country gala.  The genuine smiles of our benefactors seasoned the exploit with the zest and spice of a family affair.

Fukuda Green Farm`s myriad of fruit trees casted a haunting visage to the terrain as most of its inhabitants had already succumbed to winter`s homecoming.  Porcupine like chestnut shells were scattered on the moss ridden floor bearing their hollow bodies to the elements.  Beneath a canopy of fiber netting protection, pear trees spread their tentacle like arms as if searching for their relinquished brood.  Only the affable bellows of the proprietor soothed our perspective as he doled out nibbles of roasted chestnuts and dried Persimmon – our intended prey for this day.  Encouraged by his demeanor and energized by the tasty morsels, we marched ahead to our destination.

The sprawling expanse of leafless Persimmon trees, branches burdened with their sweet offspring, lay motionless as a hushed mist enveloped the gentle slope.  Despite the damp, the glow of the ripening fruit with vibrant hues of an autumn sunset resembled a cluster of stars in a far off nebula.  Sadly, their brethren, passed their prime, littered the darkened soil, wading into the arms of the Earth.   Echoes of joyous voices from onlookers cackled in unison as their eyes chattered to their brains of the unfolding beauty before them.  Like children experiencing their first Easter egg hunt, they scattered amid the orchard carefully examining the bountiful offering for their prize.  A sharp twist of the wrist released the smooth orb from its lofty perch and into the exuberant hands of amateur pickers.

The boisterous proprietor, blade in hand, roared kind invitations as he proffered up sliced jewels of the crop to the adulation of his new found family.  Squeals of pleasure resounded among the gathered as each savored the treat with abandon and relished the simple act of consuming succulent fruit in Mother Nature`s kitchen.

We rallied back to the bus, the night drawing near.  An aura of satisfaction settled on each of us and we knew fortune shined as we walked away from the dreamy pasture with a bursting bag of treasure.

A BREATH OF HISTORY

The two day escape into a world beyond our inner circle cajoled our boxed in perspectives.  We were enlightened by the experiences predating our own existence.  It offered a meaningful glance at the historical fabric that shape the tapestry of our own lives and gained a reverence to their origins.  Ibaraki is a sprawling geography of landmarks bearing the marks of mankind`s achievements and is worthy of discovery.  We departed from this simple excursion with our hearts emboldened and our adolescent spirits awakened.  Thank you Ibaraki!